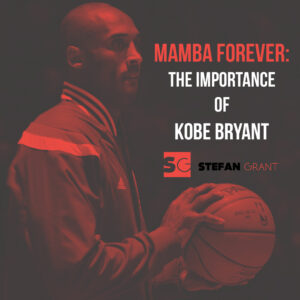 The news of Kobe Bryant’s untimely passing hit me like a ton of bricks. The news of his daughter Gianna being in that helicopter with him and 7 others made it even more painful and unbelievable.

Kobe was an important figure for me personally. I first moved from Jamaica to the U.S. in 1995 at 6 years old. By that point, I had missed the majority of Michael Jordan’s legendary NBA career. But luckily for me (and many others), Jordan’s spiritual basketball heir would be part of the 1996 draft. Part of how I assimilated into American society was by immersing myself into American pop culture and sports. I didn’t really get into basketball for another few years but by the time I came of age, there were many NBA icons, but one of the ones that really resonated with me was Kobe Bryant.

His hunger, furious energy, dedication to mastering his craft, his will to win and be the best, were all evident in the way he played the game. You had to respect him even if you didn’t like him. And there were times I didn’t like him because he was torching my favorite team and conference. Considering I’m a lifelong Miami Heat fan and lived on the East Coast most of my life, I’ve had a few of those moments.

But even when Kobe was absolutely flaming your team, it was still beautiful to watch. His skill level, basketball IQ, confidence, hell, even his arrogance was something to behold and admire. Kobe made you want to be as great as he was. And the only way to be as great as the Mamba is to adopt the Mamba Mentality.

I’d hear stories about how Kobe would be the first person in the gym and the last person to leave. How he’d push his teammates beyond their limits to then attain their own level of excellence. How he’d talk cash shit to any and everyone who dared doubt his greatness. That can only be achieved when you know you’ve put the hours in and your life’s work reflects that.

Toward the end of Kobe’s career, I was no longer the little kid with the Jamaican accent. I was now the Jamericanized rapper and entrepreneur trying to build his own legacy. Kobe was now a 5-time champion, finals MVP, all-star, and the list goes on. He had already accomplished everything he could ever want in his field, but still Kobe never got comfortable.

I watched Kobe’s latter games because watching his game over a decade later was still inspiring me. I’d be sitting here like “How’d he make that?” “That’s a crazy shot!” “How did he see that opportunity?” and it inspired me to “ball out” in my own ways. Each time I made a fire song? Kobe. Each time I did a great job hosting and/or putting together a dope event? Kobe. Each time I executed a great idea? Kobe. Even if it wasn’t basketball, I still wanted to emulate the level of excellence that Kobe Bean Bryant did.

On top of just being talented, he was tough as nails. When Dwyane Wade accidentally broke Kobe’s nose during the All-Star game and called him to apologize, Kobe said “I love it”. I’m going to paraphrase, but what I believe Kobe was saying was that “It’s all good, I can take the battle scars. Just know, I’m going to bust you and your whole team’s ass in a couple days when we play you.” I don’t remember the outcome of that particular game, but it’s safe to say Kobe made good on that promise and embarrassed my home team. Directly after tearing his achilles, he went to the free throw line, made both free throws, and walked himself, unassisted, to the locker room. Do you even understand how crazy that is?

Not only was he an incredible athlete, he was a thinker, multilinguist, businessman, investor, and content creator. He’s the first and only athlete to win an Oscar. He was building an incredible production company and getting ready to do it even bigger.

Beyond being a mythical athlete, a total badass, a great businessman, most importantly, he was a family man. A father. A husband. He was active in his family’s life and was a great father. To watch him interact with his kids and to be with his wife since he was 17-18, that in itself is an amazing accomplishment.

Kobe’s influence extended far beyond the court. He inspired people of all walks of life. From his own contemporary NBA stars to generations after. Athletes of other sports. Rappers, actors, entrepreneurs, and countless others. His tragic passing will affect us all for a long time.

In honor of Kobe Bean, itss our responsibility to keep Kobe’s legacy alive by being great in our own respective ways, because that’s what Kobe was doing and would’ve done.

My sincerest condolences go out to Vanessa Bryant, their children, the other families and individuals on that flight, the entire Bryant family, the Lakers organization, and everyone touched by this tragedy. My prayers are with you all.