The Importance of Having a Side Hustle 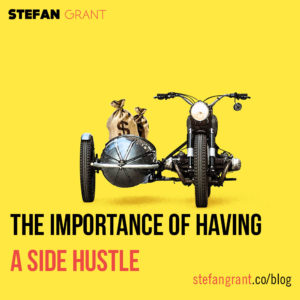 Growing up there was a quote that I always heard; “A Jack of All Trades is a Master of None”. It made perfect sense to me back then, but now? That kind of thinking is basically a death sentence. Gone are the days where mastering one skill can lead to acquiring that one comfortable 40 year job that buys your home, pays for the tuition of all your children, and even leaves you a little something extra for retirement. Not to mention Social Security.

In this day and age, hustling is the name of the game. Not just hustling harder, but hustling SMARTER and utilizing all of the resources available to you. Success in 2018 and beyond means acquiring a variety of useful skills that you can add to your arsenal as you push forward toward your goals. That doesn’t just mean skills to benefit your main career, but primarily to create an alternate source of income.

To explain how this whole side can work, I’ll break down how I created my own side hustles. I’ll even explain how one side hustle lead to my career and turned my previous career into my side hustle.

So to begin this, my life is like a natural evolution of side hustles. When I went to college in Washington D.C., I originally went to go to film school so that I could obviously follow my passion for film and movies. While attending film school, I had a side hustle as a photographer, and I was rapping and making music for fun.

One night I decided to attend an open mic after being invited by a couple of friends who made music in the D.C. rap scene. Figuring there would be a bunch of other dope rappers there, I brought my DSLR so I could snap a couple of images for them. After taking some dope pictures and getting the rappers’ info so I could send it to them, I saw that they had all started posting them on their Facebook as the profile photos.

That was tight to me because it meant that:

1. They liked my pictures

2. They needed high quality photos and would more than likely pay for them.

At next week’s open mic, I brought my camera again but I decided to test out a potential business model. I would take high quality photos of the rappers performing that night, and after they got off stage I’d show them their images. If they wanted, I would send them the best photos of themselves for $5. With an average of 20+ rappers performing some nights, it was a pretty lucrative hustle for a broke film student. That one side hustle made me maybe thousands of dollars. It wasn’t the most efficient hustle and was definitely work, but it was bringing in extra income besides my regular retail job. I was providing a valuable service, a high quality product, and being compensated for it.

This story took place in around 2008-2009 but now, in 2018, there are an infinite amount of potential side hustles than can help you bring in some additional income.

You can do anything from renting one of your extra rooms or properties and becoming a Host on Noirbnb , making some extra money in the mornings or weekends by driving for Uber and Lyft (Sign up to drive with Uber & Lyft using my referral links). If you’re an artist or designer, you can put your designs on clothing and sell them from your own Online Store.

With social security disappearing, the cost of living rising, rising tuitions, gas prices, food prices, and automation making hundreds of jobs obsolete, having a side hustle is of utmost importance. Statistically, your average millionaire has 7 different income streams. That’s money coming in from 7 different avenues. That’s powerful. When you’re young, you’re told not to put all your eggs in one basket. The same can be said about revenue sources. If you’re entire quality of life is fueled by 1 source of income, you’re at risk if anything should happen. By creating multiple income streams, you create a safer economic position in case your financial situation happens to change.