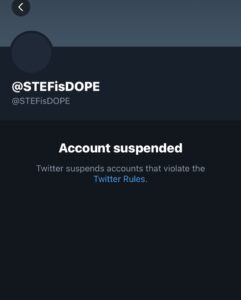 That isn’t why Twitter is broken though, I’m not entitled or self-centered enough to believe that. My suspension is merely a symptom of Twitter’s larger brokenness and deviation from what it was meant to be, and what it claims to be today.

I love Twitter. It enabled me to build a community of 36,000+ followers. It provided me a platform to build my personal brand, businesses, and most importantly connect with like-minds, but also sharpen my own outlook and broaden my perspectives through respectful and intellectual debate.

Where Twitter wins is when people are able to have productive discussions, tell jokes, get key information, and truly build valuable communities and meaningful relationships.

Where Twitter loses is when it enables hateful, slanderous, deceptive, and even violent mobs to silence people, threaten violence against others, make up and spread lies about others, and organize groups of people in campaigns to mass report others with the explicit goal of getting their accounts suspended. They do all this simply because they don’t like that person’s opinions, online persona, race, gender, preference, or whatever the factor may be.

Part of their strategies are to search your @name while including buzz words that Twitter may deem violent, offensive, or just in general violation of their terms of service if taken in the wrong context. They’ll create group direct messages where they select a target, search for tweets, share the tweets in their DM group, and begin mass reporting out of context tweets in hopes to get the target profile suspended.

Twitter’s suspension policy is multi-tiered. The first infraction may simply require the deletion of one or a particular stream of tweets. Another tier may require a 7-day suspension where your access to certain key Twitter functions are limited. Finally the last phase is permanent suspension.

What these groups will do, because they are aware of Twitter Support’s suspension process,  is report you in multiple phases until they finally get your account suspended. Then they’ll celebrate “getting you out of here” and taking part in the targeted suspension of your profile. It’s become a sort of sick ritual.

That’s precisely what happened to me and why my account was suspended. A group of individuals didn’t like a sarcastic semi-viral tweet of mine referring to Marxism and Leninism. Instead of discussing it in a civil manner, or simply muting/blocking, or ignoring me altogether, many opted to purposely search for and report random, completely out of context tweets in efforts to get my account suspended.

People even predicted my suspension happening. How? Because they know how these mobs operate and they know just how successful they are at using Twitter’s policies against people they don’t like.

Well, unfortunately, in my case, they succeeded. 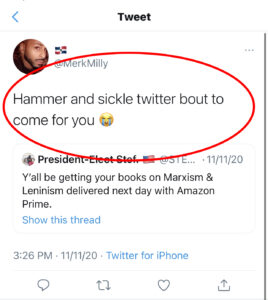 One follower, who although he considers me “Conservative”, predicted months earlier that my account would be suspended because this is a tactic that’s been utilized on Twitter for the past few years. This isn’t a recent phenomenon. 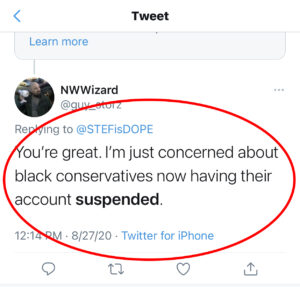 I appealed my Twitter suspension various times and provided proof of the targeted reporting. You can not only see what is essentially a declaration of them planning to mass report my account and “get me outta here” aka get my account suspended, you can also see people threatening to “hang” me, as well as another admitting to taking part in the mass reporting  campaign.

They succeeded because they’ve mastered the art of weaponizing Twitter. They’ve managed to make Twitter not only their personal sword, but also their shield too. They’re able to do this partly because the processes and systems Twitter currently has in place for scenarios like this, and many others, are simply broken. They do not even function according to the rules Twitter puts forth.

After appealing my suspension from traditional channels and not hearing anything back, I had to reach out to people who work at Twitter who know me, know who I am, know what I’m about and it was even difficult for them to connect with someone in Support. After having my appeal expedited after weeks of appealing, I received a notification saying that I violated Twitter’s rules of abuse.

You can read those rules here: Twitter Rules & Policies

I’m fully aware of Twitter’s rules and policies, which is why I found it curious that my account had been suspended. I found it especially curious after reviewing the rules again because my account was a victim of at least 4 violations in Twitter’s policy.

On the very top of the page twitter has this statement:

How can that statement be true when I provided literal proof of threats of violence and harassment against me, as well as behavior that discourages me from expressing myself, then end up being the one silenced? I honestly haven’t been able to freely and safely participate in the public conversation for years due to the amount of trolling, lies, slander, threats, and reports I get from random twitter accounts and organized mobs, but the communities I’ve been able to find, create, and foster are what make all that worth it. Now my account has been suspended due to false accusations of the very same things my account was subjected to. That’s not what Twitter is supposed to be.

The craziest part about all of this is, I’ve received actual death threats, had my home address shared on Twitter, had and currently have multiple accounts impersonating me personally as well as my businesses, and all of those accounts are still active.

I’ve had to literally purchase a firearm to protect my home and family, and those very same people get to continue to threaten others, spread falsehoods, and silence others.

Not only those accounts, there are literal terrorist organizations, anti-black organizations, pedophile organizations, anti-semitic, anti-gay, etc. I mean the list goes on. They’re allowed to spread their propaganda freely but regular people’s accounts get suspended, seemingly arbitrarily. A lot of accounts are simply suspended by bots and not even actual humans who can accurately review an account or situation.

When friends and followers of mine realized I’d been suspended, there was an outpouring of support and people trying to figure out why my account of all accounts had been suspended. They knew that I was opinionated, but they never knew me as some violent twitter user who harasses, targets, and abuses people. 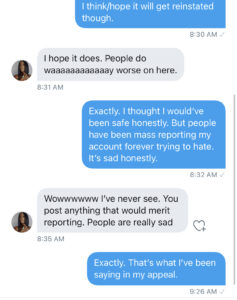 A friend of mine named Jordan posted a tweet saying “Huge F” in reference to the “Press F to pay respects” from Activision’s Call of Duty: Advanced Warfare video game.

I understand that resources at Twitter and companies around the world, big and small, have been strained due to COVID-19 and the associated issues that have accompanied it. But the process to appeal a suspension, or even communicate with someone in a productive manner at Twitter is essentially nonexistent. The response times can range from weeks to months, and that’s if you even do get a response. There’s an infinite rabbithole of Reddit threads and Quora questions around the response times from Twitter support. These suspensions won’t even come from unintentionally offending people either. Sometimes legitimate business accounts get suspended for perceived spamming, or any number of other often unexplained reasons.

You can read about one such account and many, many more here.

When Twitter has a rule that accounts are essentially removed forever after 30 days, how is anyone supposed to save their accounts when it will likely take over 30 days to even get a response?

Twitter is broken on too many levels than can properly be captured here. I’d honestly like to speak with some key people at Twitter because I’ve got some ideas for product and platform improvements but, after having my account suspended for no reason, I’m wondering if it would even matter, let alone if they’d even listen.

Let’s get it together guys.